Expats in Mexico – About Living and Dying

This is not a story about Mexico’s celebrated Día de Los Muertos ritual. Not also about how Americans come here to retire, then forget to die. The other day I came across the black-and-white details about Living and Dying, where and how US citizens meet their maker in foreign lands. You see, the US State Department is required by law to report. That is about non-natural deaths by US citizens in foreign countries.

Anyone who’s explored beyond the comforts and wonder of Western Europe knows our global village has some tough neighborhoods. In fact, in the two years, 2014-15 exactly 1,723 unfortunate US citizens ‘bought the farm’ beyond US soil. The categories to define the cause of non-natural death range from air accidents to suicide, drowning, terrorism, various shades of vehicular demise, and of course, homicide. 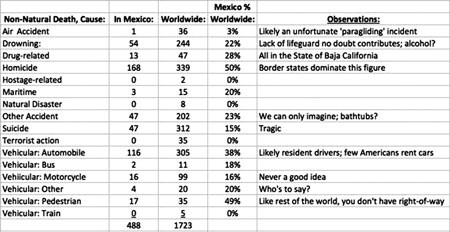 Let’s say a Blessing for Living and Dying

Let’s say a blessing to those who died in a foreign land. We have no doubt lost some talented ambassadors of American goodwill. We can assume most US citizens knew some degree of die-where-you-live comfort. All non-natural death spells tragedy. Let’s pray some fatalities were in the pursuit of happiness. Crossing a London Street after a pint (then looking the wrong way), or a sunset booze-cruise man-overboard can at least be understood with a twinge of ‘oh well…’

Mexico detractors will paint how more Americans die of non-natural causes in Mexico than in any other country. This fact is true: 488 US citizens were reported dead of non-natural causes. It was in the 24-month period 2014-2015. It’s 28.3% of the total body count. Mexico accounted for 50% of worldwide homicides involving US citizens. But before anyone calls Bill O’Reilly and launches another Mexico travel boycott. There is a need level-headed look at the figures is warranted.

Let’s not minimize how Mexico is in a war with narco-traffickers who covet transit routes to US consumers. It’s no surprise that 92% of US homicides in Mexico happen in Mexico’s border states and/or regions rarely accessed by vacationers. Headed on a beach vacation or to an inland big city? Here are the murder figures involving US citizens: 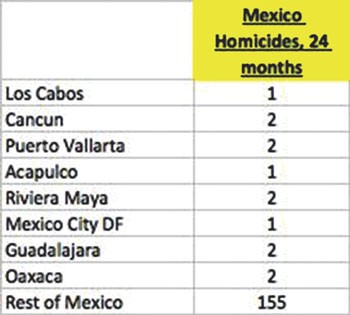 Victims who are Living and Dying

I’m not a statistician; however, my son Andy is! So, I asked him ‘On a typical day vacationing in a Mexico resort (over the next 24 months), what is the probability you will become a homicide victim?’

I suspect this figure is right up there with being hit by lightning while being eaten by a shark–while riding a unicycle. Yes, more people die of non-natural causes in Mexico — precisely because more US citizens live here. The same is true with vacation tragedies, such as drowning or vehicular accidents. With over 13 million Americans having fun down south during 2014-15, accidents are bound to follow. They are especially in a developing world setting where ‘personal responsibility means ‘watch out’ (and not ‘call your lawyer’).

So is Mexico living safe? The millions of us who call it home look at ‘safety’ through a different lens. Is it safe to drive a car? Not entirely. How about riding a bike? Not really. Walking on sidewalks? Uh, often no. Accidents happen, and some of us are luckier (and smarter) to avoid being in the wrong place at the wrong time. It’s part of death and life in Mexico. 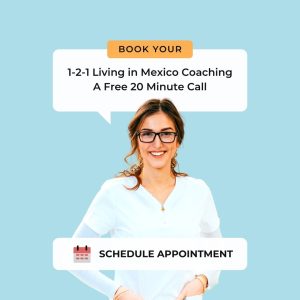