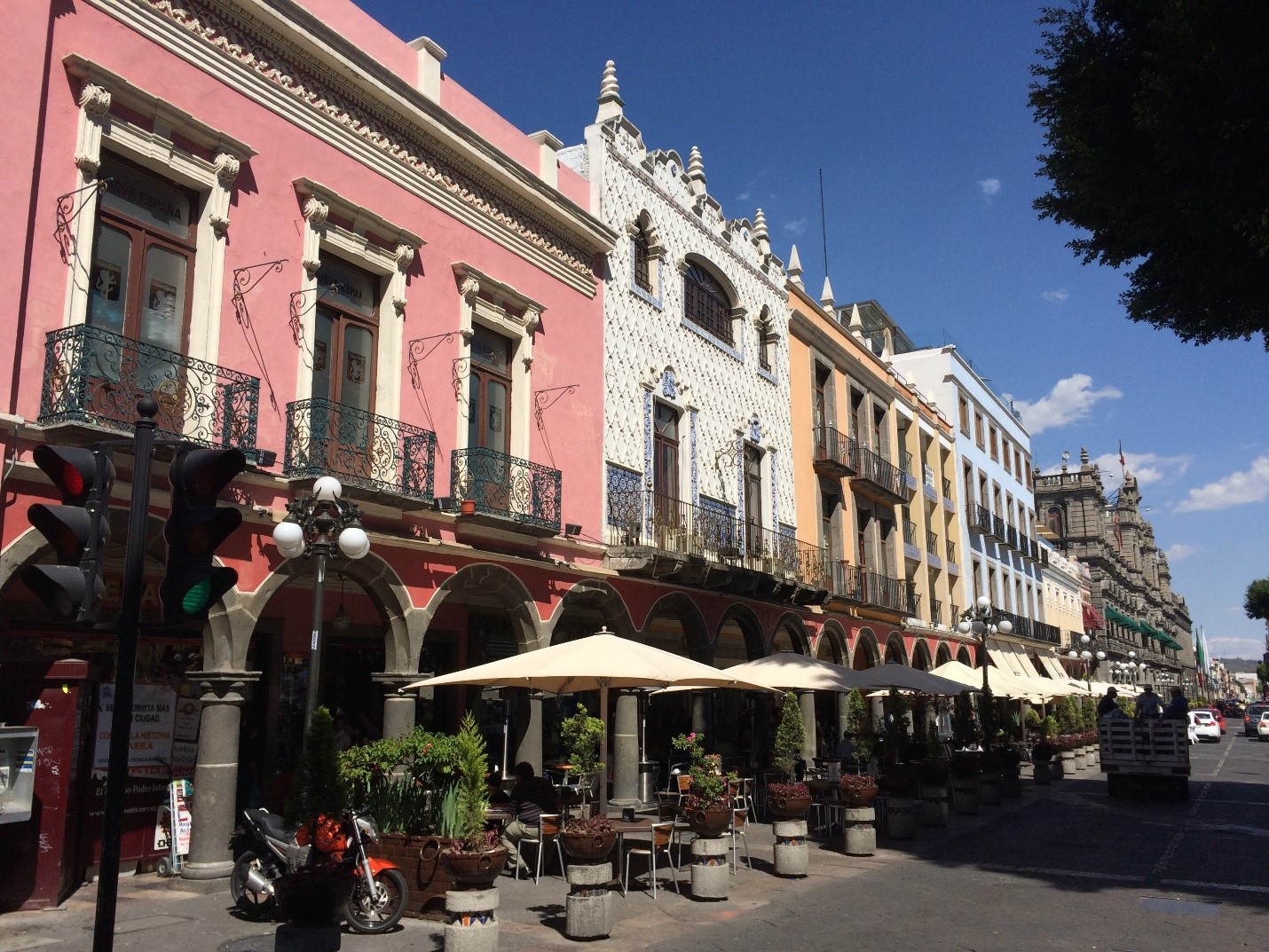 For travelers wanting to broaden their cultural horizons (staying closer to home) while exploring beyond the seashore, there is no better adventure than a journey to one of Mexico’s colonial cities. Mexico’s historic interior embodies the true character of Mexico as a nation and showcases the country’s three hundred years under European rule.

To fully appreciate the importance of the colonial period in Mexico’s development, a little history lesson is in order. Following the conquest of the Aztec empire in 1521, Mexico became the richest and most prized colony in a Spanish empire that would eventually span the globe. For 300 years, Spain ruled Mexico and converted the country into a New World replica of the mother country.

To subjugate and control this vast land, Spain imported more than just an architectural flair. So, Iberian political, social, religious, and commercial systems were introduced that strived to convert Mexico’s Indigenous people to a way of life dominated by European ideas.

Spanish culture and institutions flowed from Europe to the New World and soon inundated the Indigenous population. Starting in the 16th century, towns were built with architectural and artistic detail identical to Spain. Catholicism was introduced, as was a colonial economic system designed to serve Spain and its creditors. This incursion had a monumental impact (including a massive loss of life for Indigenous populations) on Mexico’s development as a nation.

Today Mexico has more Spanish colonial-era architecture, monuments, museums, and fine art than any country in the world. (The Catholic Church and its many Orders built 12,000 churches, temples, and cathedrals during this 300-year period.) This heritage is easily explored in literally hundreds of cities, towns, and villages. Some have remained little changed since the early 19th century.

In the past, the term “Colonial Circle” was used to describe a collection of towns and villages between Guadalajara and Mexico City. There are many clusters of colonial cites in different states around Mexico, from the Baja to the Yucatan. Today, a new brand Tesoros Experiences is leading the way with innovative, unique experiential lodging and tours. 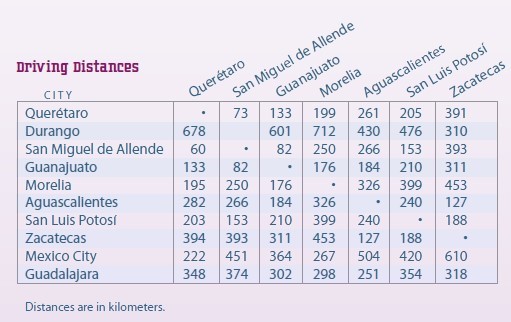 Set in Mexico’s central highlands between 6,000- and 8,000-feet elevation, this region abounds with Old World charm, romance, and gracious hospitality. The region’s prosperity and historic importance over the last 400 years are on display in magnificent architecture, artistic treasures, fine museums, and proud monuments. An endearing Old-World atmosphere prevails, with historic downtown areas (in some cases) little-changed since colonial days.

Central Mexico’s colonial attractions can be divided into three geographic zones: upper, middle and lower. To the north, in the upper zone, are the cities/States of Zacatecas, San Luis Potosí and Aguascalientes. The middle zone (often referred to as the “colonial circle”) is a series of well-known cities often combined into one itinerary using the states of Queretaro and Guanajuato. Further south and surrounding Mexico City, in the lower zone, is a collection of colonial cities and States that can be seen as day trips from the capital or with more extended itineraries in places like Puebla, Tlaxcala, and Morelos.

Despite settings that vary from high, wind- swept plateaus of Zacatecas to verdant, jungle-clad mountains of Morelos and Puebla, and from villages to major urban and commercial centers, Central Mexico’s colonial cities all share a similar past. This region of Mexico played a crucial role in world history. Spain’s colonial empire thrived for 300 years thanks to the extraction of massive wealth from the New World, and a significant portion of that wealth came from Central Mexico. In fact, for some two and a half centuries, nearly one-third of the world’s silver came from the mines of one city – Guanajuato. This fertile region was also Mexico’s “breadbasket,” its farms, orchards and ranches feeding Spain’s emerging New World cities.

The wealth extracted from this region not only fueled the development of Mexico City and Guadalajara, but also allowed Spain to wage an unending series of religious wars and crusades in Europe and the Middle East. It funded the “Baroque” movement of the 16th Century The result was the economic and social emergence of Europe, thus ending the Dark Ages.

In the early 1800s, Central Mexico was the birthplace of Mexico’s independence movement from Spain. From this conflict arose Mexico’s greatest national heroes and patriots, most of whom were natives of this region. The area also played a critical role during the Mexican Revolution of 1910 and was the scene of some of the fiercest fighting of Mexico’s bloody and tumultuous Civil War.

While fully attuned to the needs of foreign visitors, Colonial Mexico is best suited to a more experienced Mexico traveler. A working knowledge of Mexican history is also helpful. The area’s climate is most agreeable, with spring- like conditions year-round (winter evenings are cool, and often cold, due to elevation). 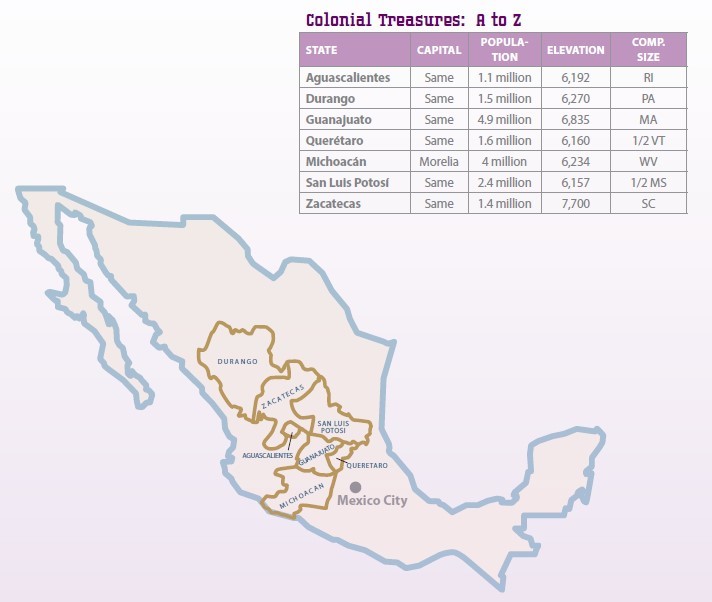 Arriving, Departing & Getting Around

Central Mexico’s Colonial Treasures are best explored by private automobile and local guides — this way you can set your own pace. Tesoros Experiences provide A to Z bundling of transfers, deluxe boutique lodging, local guides and curated culinary and cultural encounters.  Visitors should plan to spend at least seven days, although two-week visits are quite common. Tesoros Experiences has unique package tours to states like Puebla, Tlaxcala, Mexico City, Morelos, Oaxaca and more.

Thanks to non-stop international air service to the cities of Guanajuato (code BJX), Puebla (MLM) and Zacatecas (code ZCL), and Queretaro (QTO), visitors can now fly to the heart of the region, avoiding Mexico City or Guadalajara. Domestic air service is available from Mexico City and Guadalajara to Guanajuato, Querétaro, Morelia, San Luis Potosí, Aguascalientes, and Zacatecas. Due to modern autopistas (toll highways) that connect these states, getting between these colonial gems is much easier than in the past.

To learn more about Mexico for living in these locations, explore www.choosingmexico.com It’s free!